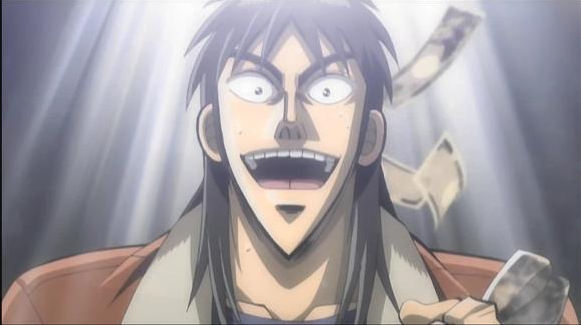 A lot of high-quality gambling animes have been released over the years. While there are very few that tend to cover pokies, there are still many other casino games woven into Japanese animated series.

We’ve put together a list of the five best gambling animes out there for fans to watch. Have a look at the ones we recommend, and find time in your 2020 to catch up with these great shows.

One Outs moves away from themes that could arise from online casinos and other forms of gambling, and goes straight to sports betting instead. It’s based around baseball and centres on a champion pitcher, who also happens to be a world-class gambler.

In the show, he is given the ultimate bet.

The bet involves him moving to the worst team in the One Out league, to work as their pitcher. Whenever he manages to get someone out through his pitching skills, he stands to win $45,000.

This might seem like an incredible deal, but there is a negative side to consider. For every run scored against him, the pitcher will lose $455,000.

And because he’s a gambler at heart, he takes the bet. The show follows his progress and the consequences of his decision.

It’s one of the most interesting gambling-based animes on the market, and is packed with exciting moments. If you love anime and sports betting, One Outs is definitely the show for you.

At first glance, this anime doesn’t seem to have too much to do with gambling — but it soon turns into one of the biggest-stakes gambling shows of all. With plenty of different games featured, including poker and darts, Death Parade offers viewers a lot of variety.

This is how the show works: two people, both of whom have recently died, are taken to a bar. When they are there, they don’t remember anything about their lives. They are given a game to play, and as they play the game their memories slowly return to them.

It’s a really enjoyable show with some real depth to it, touching on universal themes. The animation is excellent as well.

The only real negative to Death Parade is that there is just one season to watch. There has been talk of a second season, but it hasn’t materialised as of yet.

Kaiji gives viewers one of the most intense gambling experiences: instead of using a traditional game such as blackjack or pokies, Kaiji uses rock, paper, scissors — but there’s a twist.

Firstly, players are limited in how many times they can use each choice. So, if Kaiji thinks his opponent is going to use rock and he has run out of paper uses, the best he can do is draw. Players also have three stars each, which they surrender to other players when they lose a game.

They can win stars from other players when they win a game, and in order to live through the night, players must end it with at least three stars. On top of this, all symbol uses must be used up. It’s a fast-paced, often gory adventure. Kaiji is one of the most unique takes on gambling ever, and is one of the most interesting animated shows involving betting. If you enjoyed the anime, there are also two live-action movies available to watch.

Kakegurui is set in an elite private school. Here, students will compete against each other in high-stakes games. It’s not just money that’s on the line here, though: if a student loses all of their money, they must become slaves for the other students. It’s a fast-paced battle to grab as much money and power as possible.

What really makes Kakegurui so compelling is that it features a distinctive female character in the lead. Without a doubt, she’s the best gambler in the school, which causes lots of friction with the other powerful students.

She must deal with cheating and other nefarious attempts to separate her from her money and leave her as a slave for the remainder of the school year. There are two seasons of Kakegurui available to watch, so there’s plenty for you to binge when you find time.

This is one of the older titles on the list, but it’s managed to stand the test of time beautifully. At 20 years old, the animation doesn’t quite match up to more modern releases, but the storytelling is still some of the best around.

The show follows the fortunes of Tetsuya as he discovers he’s not infallible when betting on Mahjong. After a big loss, he sets out to improve and become the best.

Legendary Gambler Tetsuya is set during the aftermath of World War Two, so on top of the exciting action it also provides a sensitive insight into the struggles that Japanese people experienced after the war.

This is one of the greatest anime shows of all time, and is well worth checking out.

If you have some great gambling animes to recommend – feel free to contact us and we will add them to our updated list!

Kakegurui is one of my favorite animes ever!